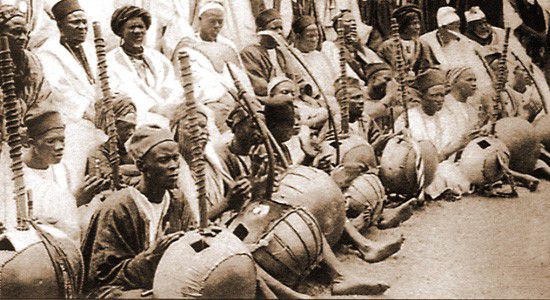 Incognito Band is an Acid Jazz Band founded by Mauritius-born Jean-Paul Maunick, nicknamed Bluey, and the late Paul 'Tubbs' Williams. They first made their debut with a disco-funk group in the 1970s known as Light of the World but in time made a few personal changes to it and renamed it Incognito. Their first release was Jazz Funk in 1981. Although Paul Williams left the band a while after, Bluey continued to write for the group and other artists, including George Benson and Maxi Priest. Consequently, Bluey also became Incognito's bandleader.

Ten years after Jazz Funk, Incognito released Inside Life, a 1991 album that spawned the single, “Always There,” with vocal track by Jocelyn Brown, which became a top ten hit. Inside Life boasted a large cast that included some of the best funk players in England at the time.

Since then, the band has released a consistent string of high-quality recordings, beginning with Tribes Vibes & Scribes, a 1992 album that marked the first appearance of American vocalist Maysa Leaks in the lineup. Incognito Band also produced numerous hit singles on either side of the Atlantic, including a cover of Stevie Wonder’s “Don’t You Worry ‘Bout A Thing.”

More than just a band in the traditional sense, Incognito is an ever-changing collective of musicians hand-picked by Bluey from a worldwide pool. The result is a dynamic musical entity that spans a vast range of styles and cultures. Bluey stated that more than 1,000 different musicians and vocalists, from all corners of the earth, have performed for the band, over the years, with lineups varying in size from eight pieces to fourteen (or even larger configurations).To name but a few, current and past members originated from South Africa, India, Brazil, Argentina, Cuba, Trinidad, Jamaica, Israel, Indonesia, Sri Lanka, China, Australia, New Zealand, Russia and much more...Many of the current key members, however, have been in place for several years, including vocalists Joy Rose and Vanessa Haynes. Understandably, the band has toured all over the world and performed in well over 25 countries since their debut.

We had the pleasure of seeing Incognito Band perform at the Happy Days Festival in Surrey alongside many Soul and Funk legendary artists such as Sister Sledge, Sugar Hill Band, Evelyn Champagne King, the British Collective, Jocelyn Brown and many more.

Click below to watch our coverage of the festival, bringing back excellent memories of Live Musical Events. The Incognito Official Band Tour Dates. Get tickets to all our latest shows here. Princess Ademiluyi Ronke is the great grand-daughter of the late Ooni Ajagun Ademiluyi, the King of the Ife Kingdom, now located in Osun State, Nigeria. She is the owner and founder of the award-winning fashion platform, Africa Fashion Week London and Nigeria. To date, the Fashion Week has gained global recognition and showcased over 1000 African and African inspired designers.

Princess Ademiluyi Ronke was born in England and is a Law Graduate from Thames Valley University in London. In 2011, she founded Africa Fashion Week London in order to promote African Fashion globally. This year marks 10 years of her showcasing African fashion designers in London. Her Africa Fashion Week London platform is the longest running festival in the UK and Europe that supports and promotes emerging African designers. Under her supervision, organizations like the KwaZulu Natal Fashion Council, The Nigerian Export Promotion Council, The Seychelles Creative Enterprise and The Trade & Investment South Africa have all used the AFWL platform to showcase creative talents from their various countries to the world.

In 2016 she was made the global and cultural ambassador of the Legacy of the Iconic Queen Moremi. The late ‘Moremi Ajasoro’ is an historical figure of extraordinary dimensions in Ife, who saved her people and heritage from extinction. Omar Christopher Lye-Fook, known professionally as Omar, is an internationally acclaimed and exceptional soul singer, songwriter and musician, who has been praised by the likes of  Maxwell, Erykah Badu and Stevie Wonder. Stevie Wonder actually wrote him a song which they recorded together as a duet 15 years later.

Omar was born on 14th October 1968 in London. His father, Byron Lye-Fook was a studio musician and drummer who worked with reggae legends Bob Marley and Horace Andy, as well as the Rolling Stones. At age five, Omar was already learning how to play the drums. During his school years, he completed formal training in piano, trumpet/coronet, and other percussion instruments. He also spent two years at Chetham’s School of Music in Manchester, and the Guildhall School of Music in London. Recording for his father's Kongo label, Omar debuted in 1985 with the single "Mr. Postman" at age 16. He shot to fame in 1991 with his single "There’s Nothing Like This". It reached number 14 in the UK Singles Chart.

In the 1990s, He recorded the albums There's Nothig Like This, Music, For Pleasure and This is Not a Love Song in and towards the end of that decade moved on to major-label RCA. When he parted ways with the label, Omar constructed his own studio and established the record label Blunt Music. He released Sing (If you want it) in 2006. Omar received the Best Neo-soul Act and Outstanding Achievement Awards at the Urban Music Awards, which acknowledges urban music artists around the globe. He was also appointed Member of the Order of the British Empire in 2012. The next year, he released The Man and in 2017 Love In Beats on the Freestyle label, which took three years to make with the collaboration of his baby brother, known professionaly as Scratch Professor (aka Roland). Roland is a Grammy Winning producer, remixer and DJ.

Omar's voice is extra soulful and distinctive although he hated the sound of his voice when he first started performing. He is now described by some as the father of British Neo soul. However, Omar knows no musical boundaries.His influences are wide and varied, including ragga, hip-hop, funk, jazz-pop, rock, and Latin/Caribbean music.

More recently, before the pandemic, Omar was awarded the Music Honour at the Black Magic Awards 2019 at the Criterion Theatre in the heart of London.

Watch his interview and his word of advice for upcoming artists.