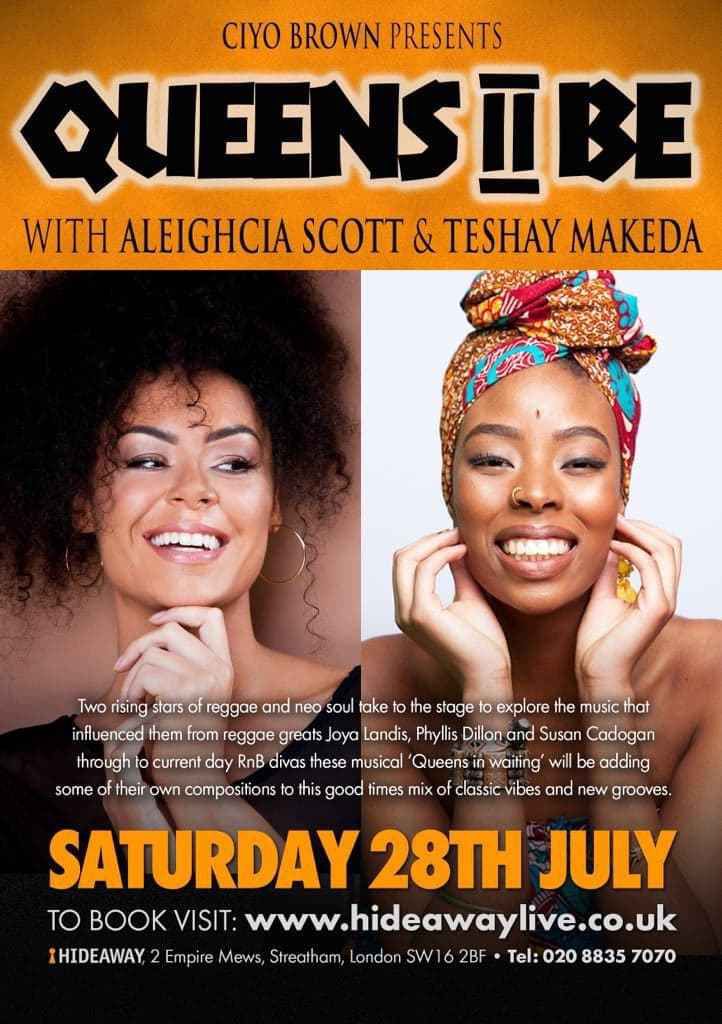 After a brilliant performance at "Radiate Windrush Festival" last month in Crystal Palace, Teshay Makeda and Aleighcia Scott  will be performing at Queens II Be on Saturday 28th July 2018 at the Hide Away in Streatham.

They will be backed by the legendary Ciyo Brown & a full live band for a night full of Reggae and Soul Vibes.

To book your ticket and more info about Teshay Makeda, read on: Teshay Makeda, whose name means 'Queen of the Sun', is a South London born singer-songwriter and remarkable talent. Raised in a Rastafarian household by a song writing, musician father and music ...

Teshay Makeda. 986 likes · 230 talking about this. Teshay Makeda is a singer based in South London. (Queen of the Sun)

I was delighted to see Teshay Makeda, a talented root soul reggae artist, based in South London, perform at "Radiate Windrush Festival" in Crystal Palace Park on Saturday 23rd June 2018.

Teshay Makeda, whose name means ‘Queen of the Sun', is a singer/songwriter with a remarkable talent. Raised in a Rastafarian household by a songwriting, musician father and music loving mother, music has always been the focal point of everything in her life. Teshay's upbringing has naturally influenced her eclectic musical style, which is saturated with elements of Reggae, Roots, Soul and Grime, to name just a few.

For more info on Teshay Makeda, continue reading below: I met Teshay Makeda in February 2018 while she performed and supported the #iamnot4sale Campaign at the Underground Solo in Camden London to continue raising awareness against modern slavery. It was the first time I was hearing her and I was stunned by her poweful vocals.

See below for info for Teshay's performance and info on #iamnot4sale campaign.

Continue reading below for more info on Teshay Makeda:

Teshay  Makeda has been a singer as far as she remembers. Born from Rastafarian parents, she remembers performing from the age of 7 years old. Teshay began singing at showcases with The Twelve Tribes of Israel (TTI) and joined the school choir, performing at prestigious venues such as The Purcell Rooms and the Royal Albert and Royal Festival Halls as a soloist. At the age of ten, Teshay joined Vocal Zones (VZ) Productions where she received vocal training which greatly enhanced her natural ability to perform to an audience, strengthening her confidence, her stage presence and her overall vocal talent. As part of VZ, Teshay performed at prominent venues such as The Albany, and the Old Vic. In 2005, Teshay was crowned Vocal Zones Under 16 Star, at the Fairfield Halls where she gave a flawless rendition of Minnie Ripperton’s ‘Lovin’ You’.

Between 2005 and 2009, Teshay became the lead singer of a collective of young singers and musicians from the TTI London house. The TTI Youth Band would regularly perform covers songs with messages of strength and positivity, keeping the Rastafari faith relevant to the youth.The group performed with Ras Zacharri, Oli Greety and also opened for Misha B and Everton Blender. They even supported the legendary ‘Queen of Reggae’ Marcia Griffiths at award winning live music venue, Hootananny in Brixton.

In 2011, Teshay started a solo career and also continued to collaborate creatively with band members such as Jemina. They both co-wrote a song called ‘No Longer (Down)’ which was featured on top South London Producer Dice’s mixtape ‘Souled Out’, giving Teshay the opportunity to work with artist such as Rae and Bonkaz, where she featured on both of their projects. She was also featured on ‘No Days Off Volume II’ hosted by Dice where she wrote and completed her first song called ‘Notes Ima Get there too’.

Realising her innate passion for this creative experience, Teshay started writing for herself, as a means of therapy and to channel messages she received from the Most High. Going deeper into her faith she visited her family in Ethiopia in 2013 which provided the divine inspiration for many songs that she has since gone on to write.

Nowadays, Teshay's notoriety has tremendously grown and the opportunities are multiplying.

In 2017,Teshay released a Demo/EP on the underground UK Reggae/Conscious Scene which led her to perform at Lambeth Country Show alongside Christopher Ellis, the late Michael Prophet, Queen Omega, and Bugle. In the same year, Teshay also opened for Grammy nominated Freddie McGregor at the prestigious Boisdale restaurant / live music venue in Canary Wharf and then went on to perform tracks from her EP at the infamous Rototom Sunsplash Festival in Benicàssim in Spain that summer, sharing the same stage as reggae heavyweights such as Chronixx and Alpha Blondy. In the same year, she also performed at the One Love Festival in the UK alongside the legendary world famous Saxon Sound System.

She is now working on several other projects one called Cycle of Life which was one of the song she sang on Saturday at Radiate Windrush Festival.

To see Teshay perform live, you can catch her at 'Troy Bar' in London, where she hosts an exclusive Reggae Open Mic night every Thursday backed by a live band. She will also be performing in Scotland on 21st July 2018. For more info, see links below